Shermjyl and the Old Powers

The Shermjyl
Shermjyl come from what in modern language would be called their own plane of relative existence on a single planet.
They have command of matter...are elemental beings of great power akin to the most powerful beings/demons/devils/spirits of human myth. Their abodes or objects/tools make use of the matter around them at hand. A home would be made out of sand/soil in the immediate surroundings being psionically/magically manipulated.
They are true neutral beings in belief, believing in the ultimate balance of forces, and they find it redundant to see actions as either good or evil. Since the majority of people in the world make judgments, their way of thought is very confusing and fearful. They are aloof from human matters.
#
Human Encounters with Shermjyl
Now did the Shermjyl interfere or go to ancient Egypt/Assyria? I have found an interesting late 19th century text that says this about the ancient Egyptian gods and super-beings that tried to interfere...
Quote

The Faerie (are the Unseelie and the Seelie human names for the negative and positive Shermjyl?)

The Unseelie, in the guise of dark gods, held Egypt in thrall from earliest times till about the middle of the fourteenth century BC, when their influence suddenly waned. At that time Sidhe of the Seelie court, with the aid of a few powerful mortals, broke their stranglehold over the empire. The Unseelie subsequently withdrew from Egypt, moving to support the growing Assyrian empire of Adadnirari I.

While few of the Faerie folk - either of the Seelie or Unseelie courts - now choose to dwell in Arabia, some few of the more independent-minded Sidhe have made it their home. These are the Djinn and the Ifrit; but I shall speak no more of them here, for their ways and history has been catalogued in detail by Philip Masters, Magister Artium Cantabrigiensis, in his article 'Concerning the Djinn...' published in Pyramid magazine.
Little has been recorded about the dwarven influence in , yet they were certainly involved in designing the engines used to build the pyramids, and in the construction of the original port at in 1400 BC.

Magick as we know it today has its roots in . It was the ancient sorcerers of who first codified magick into a science - studying how thaumic energies could be woven into spells and experimenting with harmonics - and created the first sorcerous automata nearly three thousand years before Leonardo da Vinci published his Codex Pacifica. It is believed by some that the Pharos lighthouse in andria was powered by engine-magick: according to some records, it was capable of detecting enemy ships at a great distance, and even destroying them.

Little of that ancient lore remains today: most of the books were lost in the fire that consumed the great library at andria in 47 BC. Yet it is almost certain that some copies have survived the centuries. It is known that the Order of the Golden Dawn possesses the Dark Libram of Necromancy, one of the three books of Set. Both the Order of the Golden Dawn and the League of Isis trace their histories back to the ancient temples of the goddess Isis. The Illuminated Brotherhood of Bayern and the Grand Order of the Freemasonic Lodge draw heavily on the mysticism of ancient Egypt, while the rituals of the Order of the Temple of Jerusalem are mostly derived from lore discovered in the Middle East during the Crusades - much of it, one imagines, from their time in Egypt. We can infer from this that some documents at least were rescued from the fire.

Over the last century, archaeologist and egyptologists have discovered fragments of papyri buried in tombs containing spells for the protection of the dead. Although these minor rituals are of little value (in themselves) to the sorcerous lodges, we can be sure that all orders of sorcery are taking a keen interest in whatever the archaeologists might uncover.
Several lodges have chapterhouses in Egypt

There are also lesser houses belonging to other orders in these cities, but their addresses are not commonly revealed to the general public. Sorcerers from other orders travelling in Egypt should contact their local lodge for details before travelling.

The Gods of Ancient Egypt
Before the time of Akhenaten, the Unseelie court dominated ancient through a simple arrangement with the pharaohs. In exchange for teaching sorcery to the ruling families and ensuring the might of the Egyptian empire, they themselves had free reign to do what they would within that empire. For those who were not of the ruling class or the priesthood, life was dark and often short.
When Akhenaten opposed the old gods and destroyed their leader Amun with sorcery and cold steel, he broke the power of the Unseelie. In this he was aided by the dwarves and by the Seelie court. Though Akhenaten himself died in the struggle, and his immediate successors were murdered by agents of The Adversary, the damage had already been done.
After the death of Akhenaten, the Unseelie remained in , but no longer held the power and influence they had once possessed. Attempts were made to change their image, to make it appear as though they were the benefactors of mankind rather than predators. Hathor, the executioner of the Unseelie became known as the protector of women; the memory of Amun was merged with that of Re, one of the Daione Sidhe who chose to join the conflict: but it took mankind many generations to forget the nightmare of life before Akhenaten. New gods, such as Isis and Osiris, appeared from among the ranks of the Seelie, and the Unseelie dominance was broken.

Khert-Neter
The land of the dead in Egyptian mythology. This is the domain of the Unseelie who took form as the ancient gods of Egypt on the other side of the Faerie Veil.
All this indicates to me Shermjyl involvement!?
Interesting that part about Akhernaten killing the old powers...
More from secret investigation and Victorian age documents

Færie
The færie are not a race, but a group of races inhabiting various proto-dimensions. These proto-dimensions can be accessed by ancient gates found in out-of-the-way locations (ancient burial mounds, deep, forbidding forests, London railway stations, etc.). Time does not run in the same manner in these proto-dimensions as it does here on Earth. What may seem like a day in the færie realms might equate to years passing on Earth, and vice-versa.
Most færie want little or nothing to do with humanity, though a few take perverse pleasure in causing misery or fear.

Well that sounds exactly like the Shermjyl to me!!!
The Order (humans??)
In the late 19th century, a mysterious secret magical society simply known as "The Order" began actively recruiting talents around the world. Talents who refused to join disappeared or died under mysterious circumstances. At the same time its members began infiltrating and influencing governments and corporations. It soon became obvious to the few people following the situation that "The Order" was making a bid for world domination. Various individuals, government agencies, and secret societies (magical or non-magical) began either to opt to join "The Order" in its schemes (with the hope of a say in the coming order) or to band together to fight it. Thus began "The Wizards' War."
"The Order" is a magical secret society that originated in Persia about 3,000 years ago. Until recently the organization was content to train sorcerers in the ancient arts.
In the 1880s one of the Great Old Masters (as long-time members of "The Order" are called) recruited a particularly talented Englishman he discovered on a trip to the United Kingdom.

Could we have incarnated Shermjyl here too...
The Ancients, Earth and the Dark Ones
Nearly a half million years ago a star-faring race travelled hundreds of parsecs from their mysterious homeworld to Earth and proceeded to tinker genetically with the locals. Along the route they encountered numerous sentient or semi-sentient species, but they chose to ignore them in favour of working with wolves and primitive humans from Earth. Why?
The answer lies in the Empathic abilities of the Ancients and the position of Earth in relation to the multiverse.
The Earth sits at a natural nexus of the multiverse, making it a crossroads of countless proto-dimensions. This position also makes Earth a massive Empathic beacon. The Ancients, being powerful Empaths, were naturally drawn to this tiny, obscure planet.
At the time the Ancients contacted Earth, there were three species of intelligent hominid: Homo Erectus, Homo Neanderthalensis and archaic Homo Sapiens. Of the three only Homo Sapiens showed any Empathic abilities and with a little genetic manipulation the Ancients were able to bring these talents to the fore. Strangely enough, the only other species showing any sort of Empathic abilities at this time was the wolf [1].
[1] This may explain why the wolf was the first animal domesticated by man.
Unfortunately, the same thing which drew the Ancients to Earth also made it easier for the Dark Ones to enter our universe. While attempting to understand the underlying Empathic phenomenon governing Earth and the multiverse, the Ancients unwittingly released the Dark Ones into our universe.
This is all from secret Victorian documents. – From the notes found in Dr. Lindon Dennison’s study.
Posted by Mitch Williamson at 7:13 PM No comments: 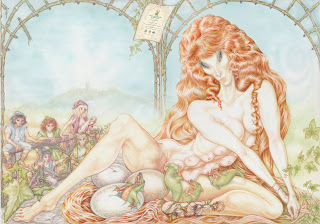 Posted by Mitch Williamson at 6:26 PM No comments:

Marisoly: A Dreamland THE BOOK

BUY Marisoly: A Dreamland THE BOOK

Marisoly: A Dreamland THE BOOK 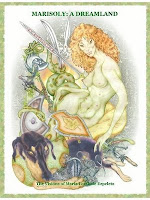